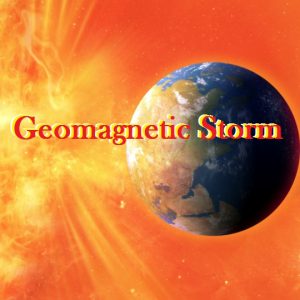 A unit of the US National Oceanic and Atmospheric Administration Department of the SWPC (Space Weather Prediction Center) issued an alert that a geomagnetic storm is set to hit earth on Sunday, October 3, 2021. They suggested the possibility of moderate-level storm conditions. Point to be noted that a geomagnetic storm is a disturbance of the magnetosphere of the earth. It happens after an exchange of energy from the solar wind into the space environment surrounding the earth. However, solar storms can brighten the sky with stunning aurora-like lights. It can also frequently damage electronics, electrical grids, and satellite & radio communications. The storm can also start power grid fluctuations, where high-latitude power systems may experience voltage alarms. The SWPC said the geomagnetic storm will primarily affect pole-ward areas of 55 degrees Geomagnetic Latitude.

There are also possibilities of satellite orientation irregularities such as increased drag on low Earth-orbit satellites. The geomagnetic storm will impact high-frequency radio propagation, which can fade at higher latitudes. It is noteworthy that the earth has had several geomagnetic storms earlier too. Some storms have caused a massive amount of damage to electrical and communication lines. The Weatherboy issued a report on September 2 in 1859 and pointed a powerful geomagnetic storm struck earth during Solar Cycle 10. A CME hit the Earth and induced the largest geomagnetic storm on record. The event seriously damaged the limited electrical and communication lines. Telegraph systems around the world failed with some telegraph operators reported that they received electric shocks. The storm was so intense and created extremely bright, vivid aurora throughout the planet, despite the damages.

The report said that people in California thought the sun rose early, people in the northeastern US could read a newspaper at night from the aurora’s bright light, and people as far south as Hawaii and south-central Mexico could see the aurora in the sky. A group of astronomers and scientists have discovered a pair of ancient galaxies near the very edge of space and time. They were hiding behind a thick blanket of cosmic dust. The hidden galaxies REBELS-12-2 and REBELS-29-2 arose more than 13 billion years ago. The team of scientists also saw ghostly spectral signals from two galaxies. A team of Japanese astronomers was examining nearby (younger) galaxies that shine much brighter in ultraviolet (UV) light when they noticed something special. The accidental discovery of these two dusty galaxies at the very edge of the known universe shows that our census of the earliest galaxies is still incomplete.